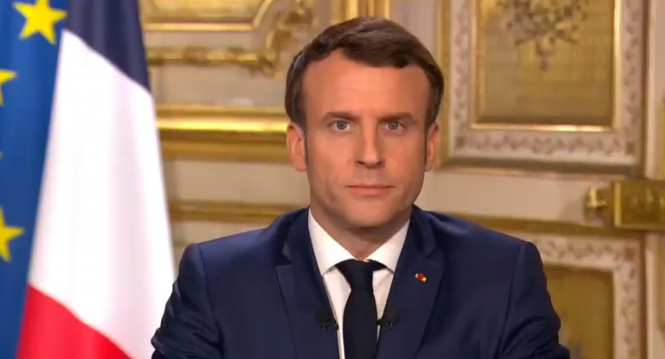 French President Macron has said that the Covid-19 epidemic is “a war” and that “we have not seen the full extent of what it will do”, as millions of masks are ordered, and 112 more people died in 24 hours.

Mr Macron was speaking to newspaper Le Journal du Dimanche from the Élysée Palace, which has been closed to all meetings since March 16.

He said: “This is a war that is going to last. My role is of supervisor. I must be at the front, going to see the teams, in the hospitals, always prepared.

“We must face up to the health emergency, protect the weak, our elderly, and also our health system itself, but also take care of society, its stress, and its ability to live through this pandemic as one nation. It will be a test of solidarity for our democracy.”

Mr Macron added: “We will have to fight an unprecedented financial crisis, a real economic crisis. We have not seen the full extent of what this epidemic will do to us.”

Further official announcements on whether France is to extend the confinement period are expected on Monday (March 23), and the President said they would be made “at the right moment”.

Read more: Report Monday re length of lockdown in France

He added: “I have always told the truth to the French on what we know, where we have been and where we are going. We have doubtless not been perfect, because we don’t [always] know everything.”

“Worse before it gets better”

Mr Macron’s interview comes as 112 more deaths were announced in 24 hours, at the most recent count (Saturday March 21). This brings the total number of deaths in France to 562. A total of 6,172 people are currently being treated in hospital.

Yesterday, health minister Olivier Véran said that the situation would “get worse before it gets better, before the effects of the confinement bear out”.

He said that confinement was the “key” to “beating the epidemic, and giving time to health workers to save lives. Being flippant, and not taking it seriously enough, is not only irresponsible, but dangerous for yourself and others.”