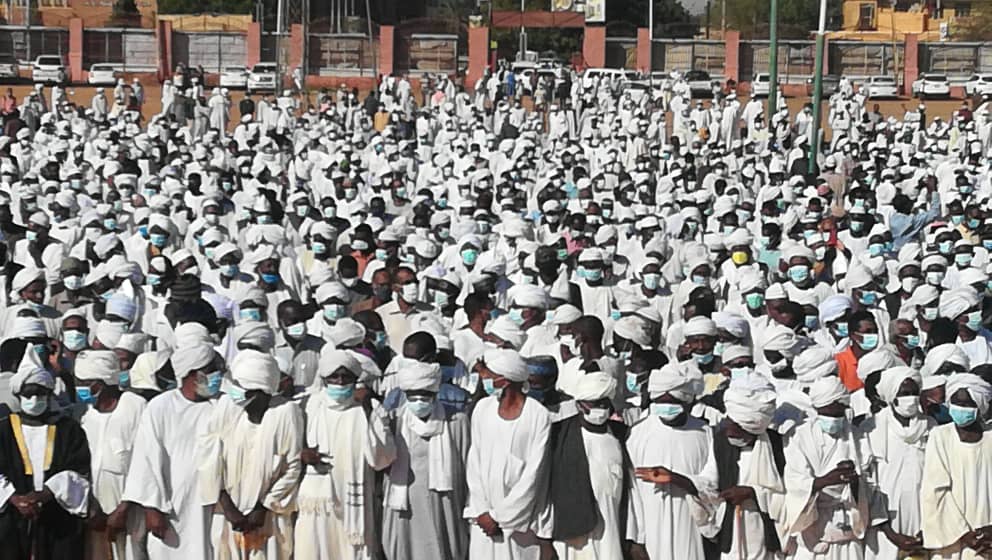 With tears and fear, tens of thousands of Sudanese bid farewell to the leader of the nationalist Umma Party and the former prime minister, and his body was buried , Friday, after an official funeral ceremony after the body arrived from the UAE ..
Al-Sadiq Al-Mahdi was infected with Coronavirus last October.

The Transitional Council of Ministers said on Thursday flags will be lowered at all state facilities, institutions and Sudanese embassies as a sign of respect for al-Mahdi, the leader of the Umma Party. Al-Mahdi, 84, was the last democratically elected prime minister in Sudan before he was toppled in 1989 by a military coup led by Omar al-Bashir.

2017 coalition
He obtained a master’s degree in economics from Oxford University in 1957. He headed the opposition “Sudan Call” coalition in 2017, which included the civil society and armed movements.

After being toppled by al-Bashir, al-Mahdi remained a vocal opposition leader throughout the three decades. Bashir was toppled last year and is facing trial for his role in the 1989 coup.

The head of the Transitional Sovereign Council in Sudan, Abdel Fattah al-Burhan, said the country had lost an icon with the death of Al-Mahdi, a national symbol.

Al-Burhan tweeted that Imam Al-Sadiq Al-Mahdi had remained loyal to his homeland throughout his life.

Ambassador Robert van den Dool, Head of Delegation of the European Union to Sudan, tweeted: “Today is a sad day for Sudan. The European Union and its member states’ embassies express their sincere condolences to the people and government of Sudan, to the members and the supporters of the Umma National Party on the death of HE Al-Imam Al-Sadig Al-Mahdi, the former Prime Minister of Sudan.”