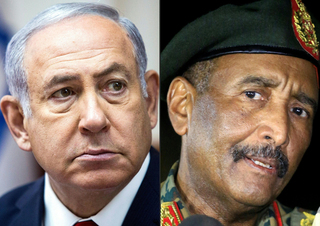 The Sudanese government has disengaged between delisting from state sponsor terrorism and establishes ties with Israel as voices of normalizations ties have been decreased.

Sudanese Prime Minister Abdullah Hamdok said earlier that the issue of his country’s normalization of relations with Israel “is complicated and needs societal consensus as the current government was not mandated.

The Sudanese PM while speaking in press conference following lifted his countries from US black list found way out of normalizing ties as he pushed this controversial issue to government institutions to decide.

Clip of Hamadok speak on this issue (in Arabic )

Political analyst undermined steps of normalizing relations with Israel due to change of government priorities within upcoming period.

“we should not make any relations between delisting Sudan from states sponsoring terrorism and between normalizing relations with Israel . As the position of Sudan as principal and moral from normalizing of relations with Israel and this should not be one of the function of the transitional government currently ruling the Sudan it should a function of elected democratic government as this this the opinion of the most political coalition”

On his Journalist Michael Attit lamented that US relation said that Israel is beneficiary to normalize relation with Sudan.

“In regard Sudan- Israel relations it is positive move for Israel. Israel has already announced that they are ready to normalize relations with Sudan and they are welcomed Sudan as a third Arab country within the region a few days a go also did the same with Kingdom of Morocco “concluded Michael .