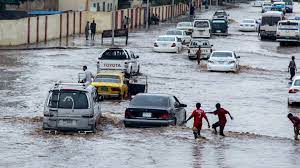 A woman and her son were killed, houses collapsed, and dozens of other buildings were damaged by heavy rainfall and ensuing floods in various parts of Sudan over the weekend.

The Civil Defence Department of Sennar reported the death of a woman and one of her sons in Um Kheirein village in northern Sennar on Sunday. They were killed and another son was wounded when the ceiling of the room they were in collapsed.

In a press statement in Singa on Sunday, Police Col. Fathelaleem Abdelrahman, Director of the Sennar Civil Defence Department, also reported that floods cut off the Abu Hajjar-Ed Damazin highway at three places, which led to a complete stop of traffic.