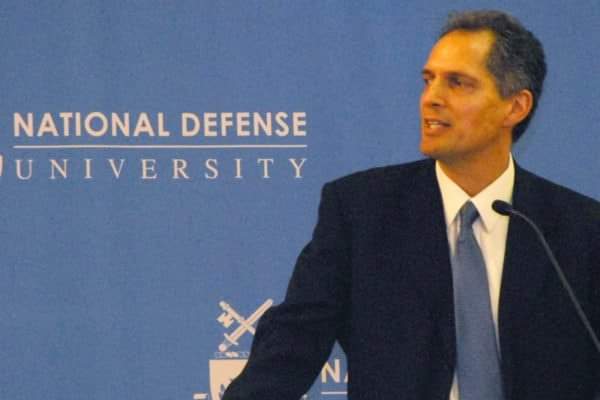 Interview with Professor Joseph Siegel, researcher and director of research at the African Center for Strategic Studies in the American capital, Washington, DC

Posted By: adminon: May 09, 2021In: PoliticsNo Comments
Print Email

Professor Joseph Siegel, researcher and director of research at the African Center for Strategic Studies in the American capital, Washington, DC, who is interested in democratization in Sudan, has many articles on that. We do a journalist interview with him about the democratic transition and ways to consolidate  Democracy  in sudan so we asked him several questions, and his answers were a wonderful & very perfect

1- firstly dr Joe  how to see future of political process in sudan  in general?

It seems the political processes in Sudan remain very fluid. The military leaders appear to continue to want to play a role in governing the country. At the same time, there are clear signals from civilian leaders and Sudanese citizens that they will not tolerate an ongoing military government. I believe military leaders may also recognize that they will not receive the financial support Sudan needs unless there is a transition to civilian government. The international isolation the military in Myanmar faces following their reversal of the democratic process should send a clear signal that Sudan would face the same response. This would erase the considerable progress in relations between the West and Sudan over the past two years.

It’s clear that all sides are still on a learning trajectory. The priority now will be for civilian and military leaders to be deepening their dialogue so that they can gain trust and have a clear predictable process for the transition.

of an important political bloc, the Islamists, and it is also a transitional period slated to continue for

several years without elections. This raises several questions: What is the future of democracy in

huge authoritarian legacy? Will the government succeed in achieving a national consensus before

the elections? And how will the political arena crystallize before and after the elections (if held),

s true that Sudan’s authoritarian legacy presents a challenge for the democratic transition. At the same time, other countries have made such a transition from even more difficult circumstances. In fact, democracies must often start from a crisis. It’s important to remember that Sudan also has a number of advantages – a long history and national pride, a culture of moderation and tolerance, a vibrant intellectual class, and a committed civil society.  All of those factors can contribute to a successful democratic transition.

I believe the fact that there are not elections in the near future can be an advantage – provided that progress towards democracy and full civilian rule continues to be made. It may be an advantage because democracy is about more than elections. Democracy requires cultivating a democratic civic culture, ensuring the judiciary is independent, establishing a respected and capable election commission, strengthening and protecting a free press, establishing a legislature with powers separate from and capable of overseeing the executive branch, developing a merit based civil service, separating political influence from access to economic opportunity, and developing a professional and apolitical military and police services.  Creating and strengthening these institutions take time.  Such reforms don’t occur in a day or a year or with the passage of a law. They require sustained engagement and dialogue among all stakeholders.

Recognizing that democracy is about more than elections is also important since the democracy-building process will continue even after elections.  There needs to be an understanding that winners in a election do not have the authority to force their will on others.  They must abide by the laws and constitution.  Nobody loses their civil liberties or political rights after an election. Freedom of the speech and media remain in place regardless of who wins in an election. In other words, democracy is a governing process, not just an event.

Sometimes, when elections are held too quickly in a democratic transition, some of these key understandings and institutions are not in place. Likewise, elections that are held early in a democratic transition tend to favor the ruling party, which is the best organized. So, having some time to work out these issues and build these structures bring advantages.  As mentioned earlier, however, all of this is contingent on their being progress made during the period leading up to elections. There is a lot to get in place. So, this needs to be a dynamic time even though elections are still a ways off.

3-why west ( us , europe) focus on withdraw military  from politics  instead of contribute in

As discussed earlier, there are many facets of building a democracy. All of these need attention and strengthening. Understanding the role of the military in government and society, however, is a fundamental issue for a democratic society. The purpose of a military in a democracy is to defend the citizens.  They are public servants that follow the will of the people as represented by the elected democratic leaders.  So long as the military sees itself as playing a role in government, there is a conflict of interest and a fundamental misunderstanding of how a military operates in a democracy. This issue is particularly challenging in Sudan given the many years the military has been involved in politics. I believe this is the reason there is such a focus from the West on the military committing itself to withdrawing from politics.

the experiences of other countries in region and all world?

There are many lessons from other experiences. I would highlight three. The first is that military governments that lead a democratic transition tend to do much better than militaries that are forced to change. In other words, militaries that embrace reform tend to gain more popular support, keep better control of their institutions, and secure a larger budget.

The second lesson is the importance of civil society. Democracy-building is a long process. It will require a sustained commitment from the population to continue to petition for reforms over time, even when there are setbacks. Research shows that an organized, cohesive civil society is one of the most vital factors for a successful democratic transition.

A third lesson is the importance of civic education. Democracy is a system of government that relies more on citizens than any other form of government.  Therefore, for democracy to succeed, citizens must understand their role in a democracy and remain engaged. Democracies require citizens to be informed, to hold leaders accountable, to demand the truth and transparency. Citizens in a democracy must also understand tolerance. That all citizens have a right to voice their opinion, even if they disagree with the majority. Understanding this culture of dialogue, compromise, and respective for differing points of view is part of the democratic education that must occur for Sudanese citizens to fulfill their roles and responsibilities in a democracy.

5- Many observers say the West is not serious in supporting the democratization process in the Third World, how to see that?

The West invested a lot of effort in strengthening democratic institutions in the developing world in the 1990s and 2000’s.  That diminished somewhat in recent years as countries in the West were distracted by their own domestic issues. However, I believe we are seeing a swing back towards more support for democracies around the world. This recognizes that democracies are more stable, they have better economic prospects, and are better partners to face transnational challenges.

6- Will the Democratic Transition Act enacted by the US Congress help in the democratic transition?

I believe the Act is helpful in that it specifically articulates the different dimensions of Sudan’s democratic transition that must be realized – accountability, transparency, basic freedoms, human rights, and security sector reform. This demonstrates a high level of interest within the United States Congress in Sudan and provides a clear roadmap for the elements needed in the transition. It, therefore, provides a tangible basis for dialogue on the state of Sudan’s transition. It also suggests the United States would be a significant financial supporter of Sudan should these conditions be met.

7- In your opinion, is the culture of third world countries supportive of democratic transformation?

There is not a single culture in the developing world, of course. However, there has long been an argument that poor countries are not ready for democracy. This is clearly false. My own research has shown that poor countries that are democracies do better for development, economic growth, avoiding financial crises, and mitigating conflict than poor countries with autocratic governments.  Likewise, one often hears that a country without a democratic history cannot democratize. This is something of a circular argument. By this reasoning, every country that has had an authoritarian government would not be suited for democracy.  However, we have seen many countries make this transition. Indeed, every country that is a democracy today at one points started as an autocracy.  Countries undergoing democratic transitions will always face challenges. That is the case with any reform. However, that does not mean they are not capable or that they would not be better off under a democratic government.

8-What is the role of strategic elites’ options in the democratic transition?

Elites play a leadership role in committing to the democratic process.  If elites from different political parties all agree on the same democratic rules of the game, then it creates a level playing field and a shared understanding that they are all operating under the same rules-based system that does not change depending on who is in power. Such leadership is particularly important at the early stages of a transition before some of the democratic institutions I mentioned earlier are created. In these cases, leaders play an important role model and set the precedent for how democratic political actors behave.

Having said this, it’s important to realize that democracy does not rely on elites alone. Democracy is a governance system of all citizens. Therefore, ordinary citizens have great influence and responsibilities in a democracy as well. They too have a role in setting norms and standards. Accordingly, there are many democratic transitions led and sustained by ordinary citizens, not elites.  Moreover, the greater extent that ordinary citizens are committed to democracy the more momentum it will have and the more resilient  it will be. This is quite important since all democratic transitions will face challenges. If ordinary citizens lose their enthusiasm and commitment to reform, it creates an opening for leaders with autocratic tendencies to revert to the previous status quo.

9-Some US intelligence reports suggested that there might be a power struggle in Khartoum?

In addition to what I’ve already said, I would emphasize the importance of maintaining momentum and resiliency. The process may be slow at times but it needs to continue moving forward.  There are likely to be setbacks but reformers must remain organized and steadfast in their commitment to a democratic society. Reformers should think about this as a decade long process. It is not just a matter of removing the old leaders, changing a constitution, or even having elections. Democratic change requires reforming the institutions that govern the politics of society. So, in many ways democratic transitions are a battle of inertia. It is like rolling a big wheel down a road. At first it will be difficult to see any progress. However, once there is some forward momentum, the process of rolling the tire gets easier.  As more institutions shift into a democratic framework, then the more momentum there will be. Eventually, the democratic movement will become natural rhythm.