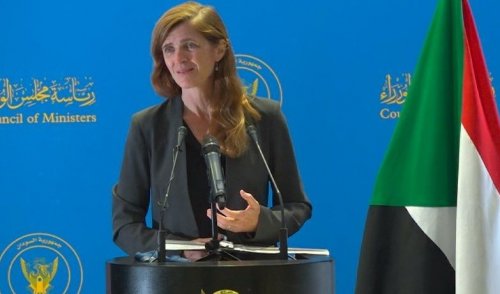 US aid chief Samantha Power Sunday hailed Sudan’s transition during a visit to Khartoum where she discussed with officials the country’s urgent economic and humanitarian needs.

Sudan has been going through a rocky transition since the ouster in April 2019 of strongman president Omar al-Bashir.

USAID said ahead of her visit that Western nations sought to support the civilian-backed transitional government after decades of authoritarian rule.

“My emphasis in this trip … is squarely on Sudan’s economic development needs and the ongoing humanitarian needs,” she told a news conference in the Sudanese capital.

She later met the foreign minister, and will also meet other top officials before leaving on August 3.

On Saturday, Power visited Sudan’s western Darfur region where she talked to people displaced during the grisly conflict there.

Fighting broke out in 2003 when black African rebels, complaining of systematic discrimination, took up arms against Bashir’s Arab-dominated regime.

During her press conference she said the USAID will provide $700 million for humanitarian assistance, democratic reforms, and capacity building.

The USAID said that Power, during her meeting with al-Burhan, stressed the “urgency of holding to account those in the security forces responsible for attacks on civilian protesters”.

The head of the Sovereign Council reaffirmed his commitment to unite the various armed actors under a unified command before the end of the transitional period, said the statement.

The U.S. official told reporters that she understands the frustration of the Sudanese people as a result of the tough economic reforms. She added she experienced a power outage during a meeting in Khartoum.

During a diner with some Sudanese ministers, Power discussed their plans for overcoming the legacy of corruption and mismanagement by the former regime and how the United States and USAID can support these efforts.

The diner was attended by the ministers of Cabinet Affairs, Finance and Economic Planning, Health, Justice, Water and Irrigation, and Federal Governance.