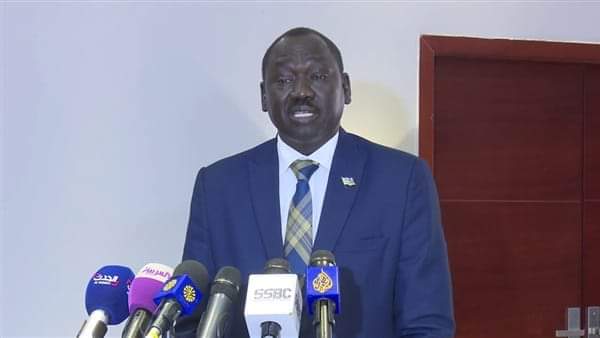 The South Sudan’s mediation team, mediating the Sudanese peace talks in Juba, has announced that the direct talk shall begin between the Sudanese government and the Sudan’ Revolutionary Front on Sunday, through a video conference.
Speaking to reporters on Thursday, after a meeting with the team of Sudan’s Revolutionary Front, the mediation spokesperson, Dhiu Mathok, said the Sudanese government presented a proposal for the appointment of state governors, and the SRF will give their opinion on the matter soon.
The Sudanese talks was extended till May 9th, Dhiu said the mediation hope that there will be a brake through on the sticky issues before the dated and reach to an agreement, despite the fragile health situation.
The mediation team member added that they have presented some suggestions to the government and they will consult and respond to them accordingly in shortest period possible. Dhiu confirmed that the negotiations will be through a video conference.
“We discussed during our meeting with SRF about the proposal that has been presented by the government about some Darfurian groups, who are not part of the Juba Declaration” “We will wait and hear from them on the issue” Dhiu said.