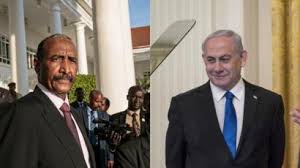 The Israeli TV channel, I24NEWS, said on Monday that the President of the Sudanese Transitional Sovereign Council, General Abdul-Fattah Burhan, seeks to fully normalize the relationship between Khartoum and Israeli , as this matter, according to his vision, is from the higher interests of the country .Israeli television, without revealing the sources on which it relied, continued, saying that after meeting with the Israeli Prime Minister, Benjamin Netanyahu last February, Al-Burhan opened the Sudanese airspace to the civil aircraft of Israel, according to Washington’s promise to delete the Sudan from the list of countries supporting terrorism, the “i24» Israeli channel, saying that Al-Burhan , informed the Council of Ministers of Sudan in the recent period on the consequences of his meeting with Netanyahu, asking them to make a decision about the nature of the relationship they want with the Israel .
According to Israeli television, Al-Burhan told the ministers that Sudan should not be in a state of hostility with any party, religion or sect, and that Sudan after the revolution is required to become different from what it was before, as he put it, indicating at the same time that they are in the sovereignty council and the cabinet Agree fully on the importance of embracing the country’s supreme interests, without entering into additional details.
Al-Burhan was met with Netanyahu in the Ugandan city of Entebbe on the third of February.