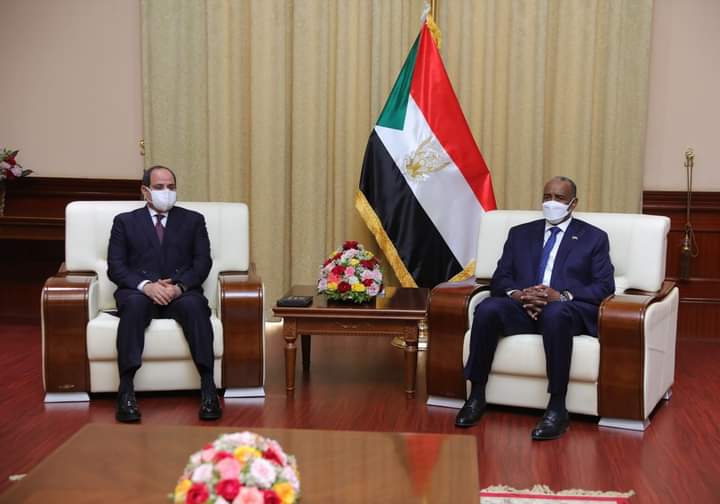 Sudan and Egypt agreed that the current delicate stage that the Renaissance Dam file is going through requires the highest levels of coordination between Egypt and Sudan, as the two downstream countries that will be directly affected by this dam, in joint press conference with Gen. President of the Sudanese Sovereignty Council, Abdel Fattah Alburhan and Egyptian president Abdel Fattah Alsisi  the two leaders has emphasized  rejecting any unilateral measures aimed at imposing the status quo and monopolizing the resources of the Blue Nile, and then strengthening efforts Bilateral, regional and international to reach a comprehensive and integrated agreement on the rules for filling and operating the Renaissance Dam that is legally binding and fulfills the interests of the three countries.

“ We discussed all files that support joint cooperation then we reached unified visions and visions that serve the progress, development and growth of the two peoples and contribute to the stability of the two countries. “ said President of the Sudanese Sovereignty Council, Abdel Fattah Alburhan

Egypt’s president arrived in Sudan on Saturday, his first visit to the country since a popular uprising led to the military’s overthrow of longtime autocrat Omar al-Bashir in 2019.

President Abdel Fattah el-Sissi landed at Khartoum international airport and headed to a meeting with Gen. Abdel Fattah Burhan, head of the ruling Sovereign Council, at the presidential palace. There, they inspected a military guard of honor. El-Sissi also met with Prime Minister Abdalla Hamdok.

The Egyptian leader was scheduled to discuss with Sudanese officials an array of issues, including economic and military ties and the two nations’ dispute with Ethiopia over a massive dam it is building on the Blue Nile, Egypt’s presidency said in a statement prior to the visit.

Cairo and Khartoum have recently called for internationalizing the dispute to include the U.S., the European Union, the U.N. and the African Union to facilitate reaching a deal on the filling and operation of the Grand Ethiopia Renaissance Dam.

In a phone call Friday with Egypt’s Foreign Minister Sameh Shukry, U.N. Secretary-General Antonio Guterres said the world body was ready to “support and participate” in AU-led negotiations to resolve the dam dispute.

Sudan has criticized Ethiopia’s plans to start a second filling of the dam’s massive reservoir during the next rainy season. At least 20 million Sudanese, more than half the country’s population, could be affected if Ethiopia fills and operates the dam without coordinating with Sudan, the government in Khartoum has said. Sudanese could suffer both from flooding and less access to drinking water because Sudan’s own dams would be affected, it says.

Sudan wants Ethiopia to coordinate and share data on the dam’s operation to avoid flooding and protect its own power-generating dams on the Blue Nile, the main tributary of the Nile River. The Blue Nile meets with the White Nile in central Sudan. From there, the Nile winds northward through Egypt and flows into the Mediterranean Sea.