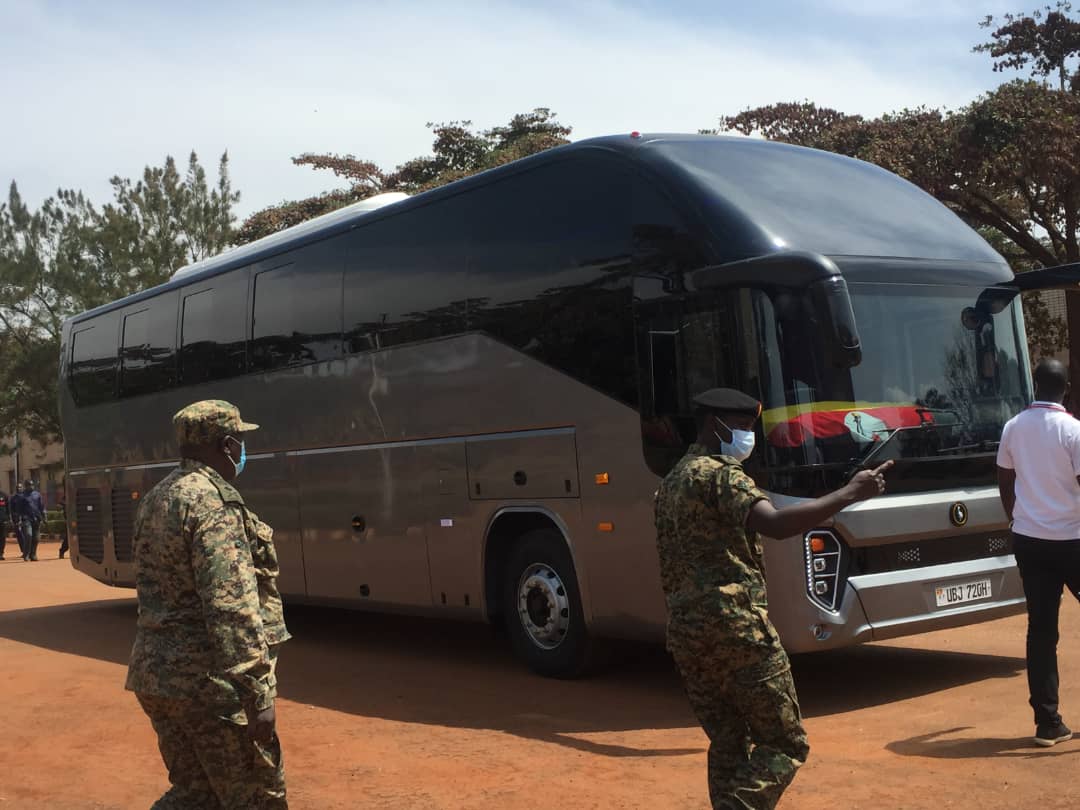 The 47- seat executive bus, the first of its kind in East and Sub Saharan Africa and the newest item on Kiira Motors Corporation (KMC) products has been fitted with combustion diesel engine. Due to its engine, it can cover a distance of 2200 km with a 500 litre fuel tank locking in a fuel efficiency range of 22 litres per 100 kilometers.

According to Muzeeyi, after completing the bus project, they will start building underground trains, to improve the transport system in Africa and also create new jobs for people.

“Building underground trains will start immediately after completing the bus project. The train will be faster, cheaper and carries many people at once. This will reduce on the traffic jam in Kampala city,” he says

Muzeeyi says, this bus has vital features like a sanitizer dispenser at the entrance where people wash their hands to avoid COVID-19. It has an executive wing and extra comfort room plus a toilet which caters for all the 47 passengers on board.”

The bus will also be available in electric version depending on the customers’ need from different parts of Africa.  Its seat configuration can be increased up to 60 from the usual 47 seats, depending on a client’s choice

Kiira Motors is led by Prof Sandy Stevens Tickodri – Togboa who is the Executive Chairman and Mr Paul Isaac Musasizi, the Company’s CEO.

According to Musasizi, KMC designs and integrates all the systems on vehicles it builds. The KMC’s vehicles components are contract manufactured until the domestic and regional automotive supply chain localization achieves the required technical capabilities and economies of scale to justify domestication of those functions.

This bus has been fully built locally at the UPDF Luwero industries and the steel body-frame for the bus and some of its body panels have also been locally sourced including paint and other materials.

Is the bus affordable to average people?

Allan Muhumuza, the Director Marketing and Sales at Kiira Motors corporation, says this bus meet the requirements of travelers going up-country, across the boarders, tourists and shuttle service for executive travelers. It’s also affordable for all average Ugandan in terms of costs.

“In terms of purchase price, our bus is competitively priced, depending on the requirements of the customer and the spare parts guarantee, compared to other products on the market today.   But we advise our clients on the best product since with our buses, the customer is saved from paying import duties, compared to fully built unit. So it’s a cost saving bus,” he says.

Muhumuza says, they are ready to serve the market and meet all the requirements of the bus users. “We will work with the bus operators to make a bus that meet their standards as compared to imported buses which sometimes lack some requirements, and its operators have no say about it,” he says.

“We shall work with all bus operators in the country to equip them with knowledge, to keep the buses fully operational on the road,” he adds.

“This bus comes with installed CCTV cameras in and outside the bus for security purposes. In addition, comes with on-board Wi-Fi connectivity, charging USB port for each seat, fridge, toilets, magazine holder behind the seats and a TV,” Muhumuza says.

Are Ugandans excited with the bus?

It has made different initial trips to different parts of the country such as West Nile, Karamoja, Central Buganda and Eastern region where it has been welcomed by many Ugandans and their local leaders. Hundreds of Ugandans where the bus made its tour celebrated the developments made by KMC in motor industry that is championing green mobility technologies in Africa.

The coach also made its first road tour, from Luwero industries in Nakasongola to Kampala, with a group of journalists as its first passengers enjoying the ride as well as covering the event.

Along the way, in some towns like Kasana Luweero, where the bus stopped and some people asked the driver to enter the bus and view its interior part, were not contended that it has been made in Uganda.

“I don’t think Uganda has reached at this level of making the bus. It’s imported,” one Kasozi a vendor from Kasana roadside market says.

“Oh, this bus is an example of ‘New Uganda’ which we have been waiting for a long time,” another vendor says.

Muzeeyi who is now the General Manager Luweero industries appealed to businessmen and the government to buy the brand new bus made in Uganda to improve on the country’s transport system.

“When these buses are bought, we shall be able to grow and create international market and there will be an increase in job opportunities. The bus has a business and an economy class. It’s the only bus where you spend less and enjoy good facilities. And with this bus in future, you don’t need to drive your own car,” he says.

The journalists loved the bus as it’s the first of its kind in East Africa due to its unique features like little fuel consumption compared to other buses, sanitizer dispenser to wash hand and avoid COVID-19, CCTV cameras and USB charging system on every seat.

Muhumuza says, Kiira motors is working with reputable strategic to produce 30,000 buses for the regional market, with 65 per cent parts and components localized by 2030.

“This builds on the successful development of the Kayoola electric and Diesel buses built through technology transfer and utilizing the facilities and resources at the UPDF National enterprise corporation Luweero industries,” he says.

How will Kiira motors buses save Kampala people from traffic jam ?

Muhumuza also says, Kiira motors and the partners plan to produce and deploy 1,030 buses by end of 2021, 50 of which will be electric. “The initiative is aimed at modernizing public transport in the urban center in Uganda and beyond, while building the indigenous motor vehicle industry through technology transfer and localization of auto parts manufacturing,” he says.

Kampala and other cities in the region have for decades faced challenges of road and traffic congestion, pollution, unemployment and under employment resulting into low fuel economy, poor air quality, low labour productivity, and compromised road safety.

“This calls for establishment of a robust integrated and inclusive mass transport system based on environmentally friendly solutions. Couple with localization of capabilities to develop, make and sell vehicles and components, this provides an unprecedented opportunity for transforming the economy drawing on the demographic dividend of Uganda,” Muhumuza says.

The establishment of mass transit Bus systems support by the domestic manufacturing of buses and components for the regional market is consistent with Uganda’s aspirations and pathways to vision 2040 outlined in the national development plan III and the NRM Manifesto 2021 – 2026.

The above developments are projected to create over 30,000 jobs directly, 100,000 jobs indirectly, and catalyze investments by Micro small and medium enterprise in the manufacture of motor vehicle parts. The strategic and long-term focus on electric buses for the cities further demonstrates Uganda’s commitment to enhance environmental stewardship.