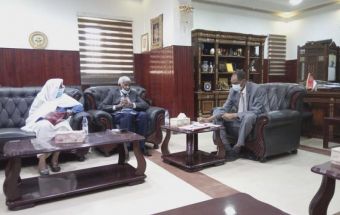 Sudan’s Minister of Agriculture and Forestry, Dr. Al-Taher Harbi
declared that the El Hawad Project for Integrated Development will be presented at the forthcoming conference on Sudan investment opportunities, scheduled for May 2021 in Paris. According to a press release by the Ministry of Agriculture and Forestry issued Wednesday , Sudan’s minister of Agriculture and Forestry asserted that major American agribusiness companies will be coming to Sudan through the coming period. He added that sound, attractive partnership plans would be worked out within El Hawad Project to attract leading foreign agribusiness players. The Minister of Agriculture reaffirmed the strategic importance that the Sudan government attaches to El Hawad Project which adopts the concept of multilateral investment partnerships that bring together the state, smallholder farmers, and national and foreign investment entities.
The CEO of El Hawad Project, Dr. Mohamed Elmannan, described El Hawad project as a giant development corridor that applies the concept of investment partnerships in integrated value chains: farming, animal production, agro-processing and marketing. This mega project covers an area of 5 million fedans/acres and stretches throughout five states: the River Nile, Khartoum, Kassala, Gedaref, and El Gezira. Dr El Mannan said that plans comprise establishing a one million acre ranching station, replicating the model of Australian cattle stations. He asserted that El Hawad ranching station will be the second largest in the world, following Anna Creek Station in Australia, and will outstrip King Ranch in Texas, USA, which at present ranks second globally. According to El Hawad’s CEO, the first phase of the project amounts to 2.4 million fedans/acres, including 600,000 fedans/acres being historical land rights of community farmers. Following legalization and distribution of land titles, an array of investment options will be offered to smallholder farmers to select the formulas that suit them.