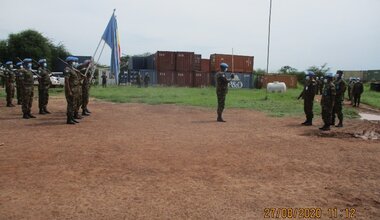 The rollover, which means UNISFA would remain present in Abyei until October 15, was suggested “in order to give Sudan and South Sudan the space to discuss future arrangements and the way forward.”

“The new rapprochement between Sudan and South Sudan has yet to translate into significant improvements on the ground in relation to their dispute over the Abyei region,” he told a videoconference briefing on Tuesday.

UNISFA was established by Council resolution 1990 (2011) to include an initial deployment of 4,200 Ethiopian troops, 50 police personnel, and appropriate civilian support to provide security and protect civilians under imminent threat of violence in Abyei.

Lacroix said Sudan and South Sudan agreed, during a meeting of the Joint Political and Security Mechanism hosted by the Government of Sudan in October, to establish checkpoints, introduce search and seize operations, deploy joint military observer teams and accelerate progress on the Joint Border Verification and Monitoring Mechanism, as well as border-related benchmarks.

“However, the security situation and intercommunal relations in the region remain tense,” he said.

During the ensuing debate, Security Council members encouraged Sudan and South Sudan to build on their current warming relations. Some delegates said “the two national leaders must seize the present opportunity to determine Abyei’s final status and meet the aspirations of its communities.” Several speakers called for renewing UNISFA’s mandate for six months to ensure that a clear, effective exit strategy is finalised.

The announcement follows a request by Sudan for the UN to replace the Ethiopian soldiers deployed in Abyei with other soldiers, because “it is not reasonable to have Ethiopian forces in the strategic depth of Sudan at a time when the Ethiopian forces are gathering on the eastern borders of Sudan,” confirmed by Minister of Foreign Affairs Maryam El Sadig El Mahdi on April 7.

The popular leadership of the Abyei area have echoed El Mahdi’s call for the removal of Ethiopian troops from UNISFA, asserting that “they are no longer keeping security there and have become an element for instability and insecurity”.

Mansour called on the transitional government to move to protect the citizens of Abyei and their properties, voicing their support to the decision of the Ministry of Foreign Affairs, calling for removal of the international forces from Abyei area