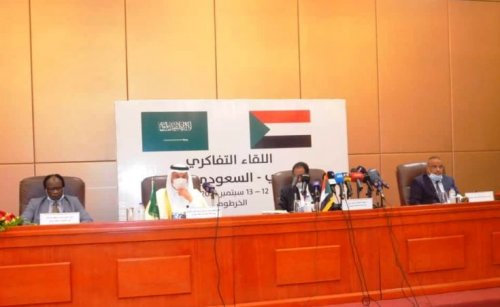 Sudanese minister called on Saudi businessmen to put their money into the very much needed infrastructure investments among other economic activities to rebuild the national economy.

A Sudanese-Saudi economic forum began in Khartoum on Sunday. The meeting, which is co-organised by the government of the two countries, aims to allow 45 Saudi public and private investors to better identify economic activities where they can inject their money.

“We hope that understandings will be reached about it,” said Ibrahim before adding that his government will remove all the difficulties facing foreign investors.

He affirmed his government’s support to the private sector to build strategic partnerships to create a conducive infrastructure to attract foreign investments after Sudan’s return to international financial institutions and the lifting of international sanctions.

Sudanese Minister of Agriculture al-Tahir Harbi encouraged Saudi businessmen to invest in agriculture pointing that Saudi investments in Sudan are successful, especially in the areas of rained agriculture, animal production and forests.

From July 5 to 9, a Sudanese ministerial delegation involved ministers of finance, investment and energy was in Riyadh where they met with Saudi officials and businessmen. The two sides agreed to meet in Khartoum to better assess economic opportunities and finalize agreements.

The Saudi delegation is led by Abdulrahman bin Abdulmohsen Al-Fadhli Minister of Environment, Water and Agriculture.

In March 2021, Riyadh pledged to invest $3 billion in a joint fund in Sudan. Also, Riyadh promised to encourage private capital to invest in Sudan and provide support to Saudi businessmen to work in Sudan as part of its 2030 vision to transform the Saudi economy and reduce dependency on oil.

Minister Al-Fadhli reiterated in his speech Saudi Arabia firm desire to cooperate, strengthen economic and trade relations, and develop investment for the benefit of both countries.

He further referred to the directives of the Kingdom’s government to discuss investment opportunities in the fields of energy, infrastructure, agriculture and communications.

During the meeting, the Sudanese officials proposed 124 investment projects in various fields, including 77 projects for partnerships between the private and public sectors, and 47 projects for investment in agriculture, livestock and fisheries, in southern and western Sudan states.

With regard to the infrastructures, Sudan proposed to invest in highways, bridges, railways and the national maritime carrier, the Sudanese Shipping Lines Company.

The proposed projects included investment communications and digital transformation, oil sector, electricity sector. and minerals, and the establishment of free zones and markets.

During, the meeting of last July in Riyadh, the Sudanese officials emphasized that transport and roads are crucial for the development process in Sudan and can be monetised quickly.

Chairman of the Saudi Business Council Hussein Saeed Bahri told Sudan Tribune and that the Saudi leadership has directed them to invest in various fields in Sudan, and cited wide opportunities in mining, agriculture, livestock, fisheries, communications, ports, roads and railways.

He pointed to Sudan’s proximity to Saudi Arabia, adding that the East African country represents a strategic depth in food security, especially since the Kingdom has stopped the cultivation of wheat, barley and fodder due to lack of water.