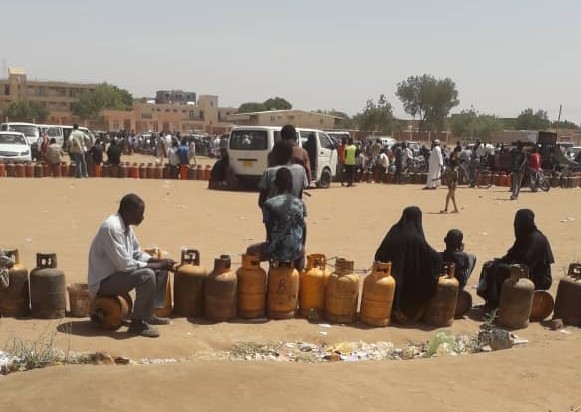 Khartoum- The citizens and residents of Khartoum state nowadays , live in their hardest moments , as total lockdown due to out break of covid19 pendemic ,from side ,and lack of basic commodities from another , but the truth remains , does the government arrange alternative options to guranty the smoothly continuation of patriot’ livelihood ?
Cooking gas is one of rare commodity , that challenge the government today , although, authorities adopted packages of measures in this connection , where allocated specific arena, in all Khartoum locality, for direct distribution of cooking gas to the people.
Playground of Al ban- jaded, Al hajyousif,al radmya (East Nile locality) , has witnessed a rally of citizens waiting for gas supply . the exhaust and and fed up could be shown on the face of people . Long line up of of gas slynder are arranged , and others chained and blocked via padlock for safety purposes.
The citizen, Hussein Al tahir, said , we stand up since early morning, but no gas vehicle arrives so far. He Also added, yesterday, one trucks brought gas slynder , but unfortunately
was not enough to cover all beneficiaries.
Another benficiariy , preferred unreveal name , has described that with unfair measures by government , saying, there are some quarters would not share their stock due to distance factor. He recommended that officials must escort wisdom before making decisions.