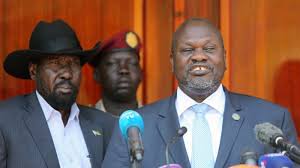 Some top South Sudanese government officials, including the country’s first vice president, Riek Machar, Monday, have tested positive for Covid-19.
Speaking to the state owned TV last night, Machar, who was also deputizing the country’s high level task force on fighting the corona virus, confirmed that the Minister of Defense, Angelina Teny, was also tested positive among other members of the team, which he didn’t want to disclosed their names.
Machar also announced that some bodyguards were also tested positive.
South Sudan has recorded more than 250 confirmed cases of Covid-19, since the country tested the first case in in April. Only three have been fully recovered and two deaths have been confirmed.
The leadership of the country announced this last week that they country is preparing to relaxing some of the economic related businesses and institutions such as Bars, shopping centers, Airports, and roads. The decision has been criticized by a wide population.
South Sudan’s President, Salva Kiir Maryardit, removed Machar as the head of the high level task force and appointed Hussein Abdulbaggi Akol, as the new deputy chairperson.
Machar said he and other officials who have been tested positive for Covid-19, will go quarantine for the period of two weeks.