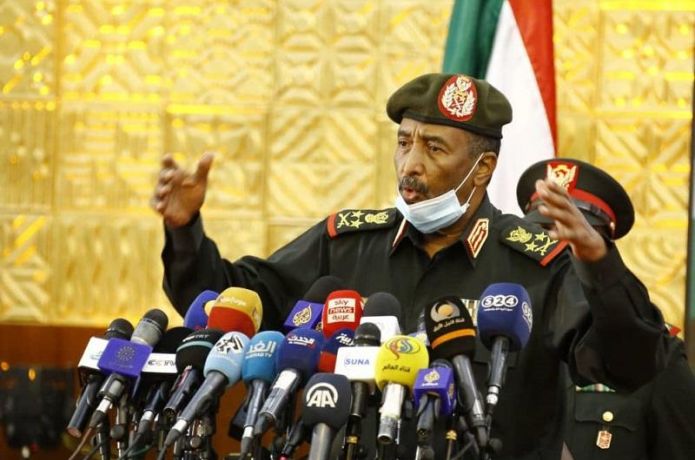 President of the Transitional Sovereignty Council and General Commander of the Armed Forces, Lt. Gen. Abdul-Fattah Al-Burhan, stressed that Sudan does not want to stage war against its neighbor Ethiopia, and it does not have any interest in entering a war with any of the neighboring countries, stressing that Sudan wants to have borders that preserve its rights and have marks placed on the ground.

Addressing a festival held Saturday at the Friendship Hall for launching the private sector’s initiative in support of the Armed Forces, Lt. Gen. Al-Burhan renewed Sudan keenness to establish good relations with all the neighboring countries, especially Ethiopia.

He said that what the Armed Forces did on the eastern borders was the deployment of the army inside the Sudanese territories, as well as securing to the international borders at the known sites, indicating that the Al-Fashaqa area has been under repeated attacks against the Sudanese farmers by the Ethiopian side.

He said that what we have heard that Fashaga is an Ethiopian land is a new matter that requires us to stand up to defend the land of Sudan.

He saluted the martyrs of Sudan throughout eras who had struggled for the unity and survival of the Sudanese state, praising the common stands between the Armed Forces and the people, which were manifested in the October Revolution, the April Uprising and the glorious December Revolution in which the efforts of the military establishment were complementary to the struggle of the Sudanese people.

Al-Burhan has expressed his deep regret over the events in Genaina city in West Darfur State, calling on the citizens to stick to wisdom and to avoid violence.

He indicated that the Sudanese people remained suffering from the holding of weapons outside framework of the regular forces institutions, a matter which contributed to indiscriminate killing, fighting and tribal disputes.

He said that success of the December revolution and achieving the requirements of peace necessitate that the Sudanese people should focus efforts on the building of Sudan and establishing a healthy and sound country for the future generations.

Lt. Gen. Al-Burhan indicated that the Armed Forces will focus, as part of its reorganization operations, on protecting the borders, referring to a trend to move the camps and the armed presence from inside the cities.