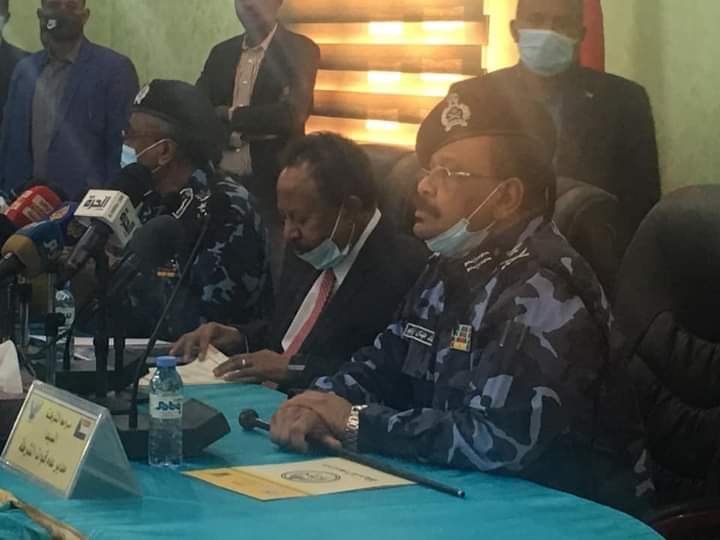 The Sudanese Prime Minister revealed an agreement between his government and the international community that the Sudanese police would assume the task of protecting civilians in conflict areas as an alternative to the UNAMID forces, which had recently ended their mission, while stressing the need to develop and develop the partnership between civilians and the military until reaching the constitutional conference and holding elections.

Hamdok, in his first speech to police commanders on Monday February 22, 2021, confirmed agreement on a program for the coming period based on five basic priorities, on top of which is the issue of the economy and addressing the living distress, and urged the police to play their role in controlling the markets and said that the second priority of his government is to fulfill the peace requirements and complete it. In signing with both the leader of the SPLM-North Abdul Aziz Al-Hilu and the leader of the Sudan Liberation Movement Abdel Wahid Nur, he emphasized the role of the police in protecting civilians, and revealed the consensus between his government and the international community that “the police would be the alternative to UNAMID, and he said that they seek and strive to achieve this because of its Reflections internal and external” he said .

The Sudanese Prime Minister said that the third priority of his government is to build balanced foreign relations based on the interest of Sudan first and foremost, and to maintain a safe neighborhood, and a new Sudan that represents a force for peace and civilized interaction with its neighbors and all countries. He also indicated that the fourth priority of his government is security, which he stressed Without security, there will be no stability, peace, or democracy, affirming the initiation of the implementation of the required reform in the security services, whether in the police or the security apparatus, and he announced the imminent approval of the Internal Security Law, which confirmed that it would be an integral part of the police, and said that work in it He made a great way and at its ends.

Hamdok stressed that the fifth priority is to address issues of transition, and he acknowledged that the transition process is going through many complications and challenges, pledging to overcome them through strengthening and solidifying the company between civilians and the military, which he urged to be a Sudanese model that avoids the evils of slipping, especially in light of what is happening in the regional environment. He pointed out that the issues related to the completion of the transitional authority bodies, including the formation of commissions and the Legislative Council, but stressed that the most important thing is to strengthen and develop the partnership between the military and civilians until reaching the Constitutional Conference and the elections.