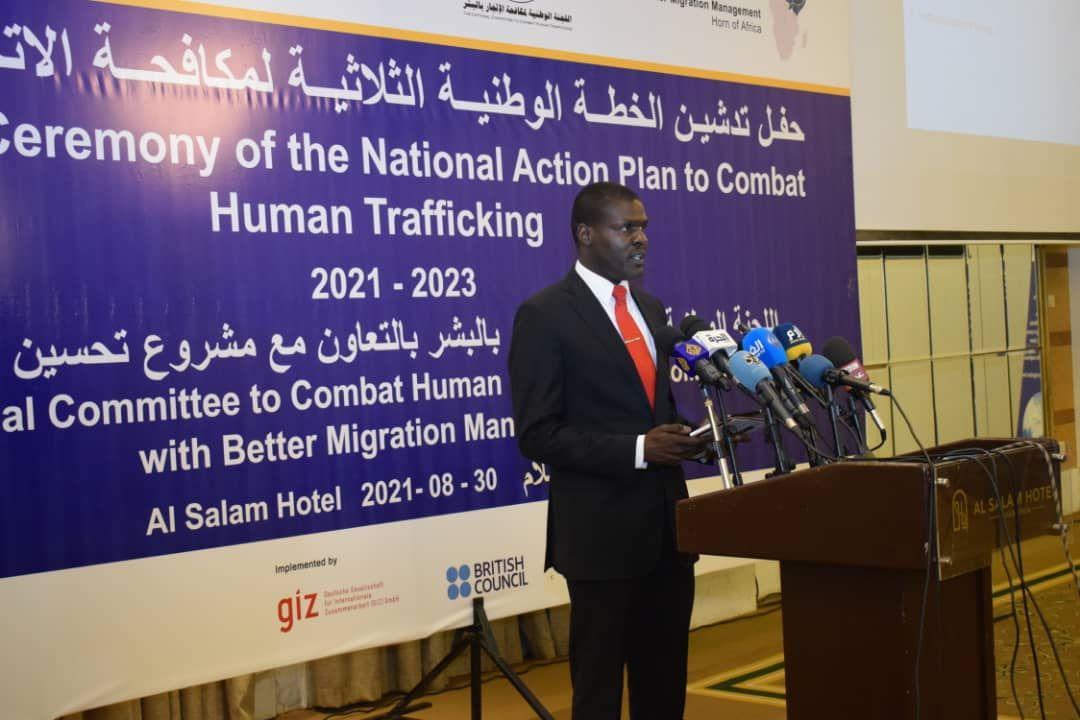 The Minister of Justice, Nasr-Eddin Abdul-Bari, has affirmed the state’s commitment to address the human trafficking crimes and the crimes of human exploitation of fellow human beings, especially when conditions push him to migrate.

At a ceremony for launching the national three-year plan to combat human trafficking (for the period 2020 – 2021) at the Peace Hotel on Monday, the Minister of Justice stressed that human beings are equal and that there is no human being less human than another human being.

He affirmed the role of the states in providing protection and equality between human beings and focusing on the legal measures and intensifying cooperation between justice organs in this connection.

He said that in the past year Sudan was able to exit from the list of the second-lowest level to the list of second-highest level of human trafficking.

He called for intensify efforts and cooperation at the local and global levels and to work to strengthen legal frameworks so as to confront the crimes of human trafficking, which came as a result of humanitarian problems represented in economic crises, political tyranny and the human being himself, affirming the continuation of cooperation with the international organizations that aim to preserve human dignity.

On his part, the European Union Ambassador, Robert van den Dool, stressed that there are achievements and efforts made by Sudan in the field of combating human trafficking by investigation and trial of human traffickers and protection to victims, congratulating the Sudanese government on the national action plan.

The European Ambassador said that there are 40 million people who are victims of human trafficking who are exposed to worst kinds of dealing and the confiscation of their passports.

Meanwhile, the Undersecretary of the Ministry of Justice and head of the National Committee for Combating Human Trafficking, Siham Osman, said that the committee will work to implement the national plan with all seriousness, and that the plan comes in response to the requirements of the stage.

Siham pointed out that Sudan is at the center of the most active areas in the region and a home for those fleeing the woes of war and receives millions of migrants and refugees despite the conditions that Sudan suffers from. She stressed that the three-year plan involved many institutions that are concerned with the prevention, protection and criminal prosecution.

He said that the main objectives and challenges are still existing, which are facilitating safe migration and combating illegal migration in particular, stressing the need for concerted local and international efforts to preserve the rights of migrants and to help them.

He indicated that Germany is keen to help Sudan with training and psychological support, appreciating all the efforts of all partners in this field.