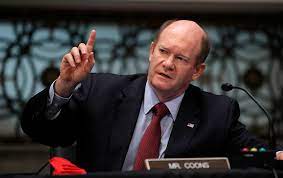 The proposed resolution was introduced on Thursday by Senator Chris Coons, a Democrat, who is a close friend to President Biden and known for his support to the Sudanese people.

The Sudan Democracy Act has been filed as an amendment to the Fiscal Year 2022 National Defense Authorization Act (NDAA).

“The legislation mandates the imposition of targeted sanctions against individual actors that undermine a civilian-led democratic transition, peace, and human rights in Sudan,” said a statement released by Senator Coons.

The amendment enables the President to “block and prohibit all transactions in all property and in­terests in property of a foreign person”.

Also, the text bans visa delivery to any person incriminated under this legislation.

The member of the Senate Foreign Relations Committee further condemned the brutal crackdown on peaceful protesters after the 25th October coup.

“This is unacceptable and unconscionable, and those responsible must be held accountable for the blood on their hands,” he said.

The State Department on Thursday condemned the excessive use of violence against protesters in Khartoum on November 17 which resulted in the death of 15 people.

“We call for those responsible for human rights abuses and violations, including the excessive use of force against peaceful protesters, to be held accountable,” stressed a statement issued by Ned Price State Department Spokesperson.