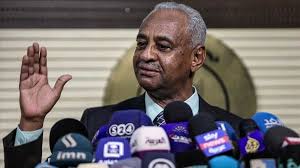 The Sudanese Minister of Information, Faisal Mohammed Saleh, is said to have been gone into a self-isolation, Tuesday, after being in contact with an infected person who tested positive for COVID-19.
Faisal, who is also the government spokesperson, was hosted along with four other panelists on Sudan’s state owned TV, Sunday, May 3rd, to discuss around the World Press Freedom Day.
The program which was presented by Promiment Journalist , hosted a UNESCO official, who turn to be positive from his brother, who is currently in quarantine center for treatment.
Faisal, is the third Sudanese official who has gone in isolation, after his Ministry’s first undersecretary, Al-Rashid Saeed Yagoub and the state minister for Physical infrastructure, Hashim Ibn Auf