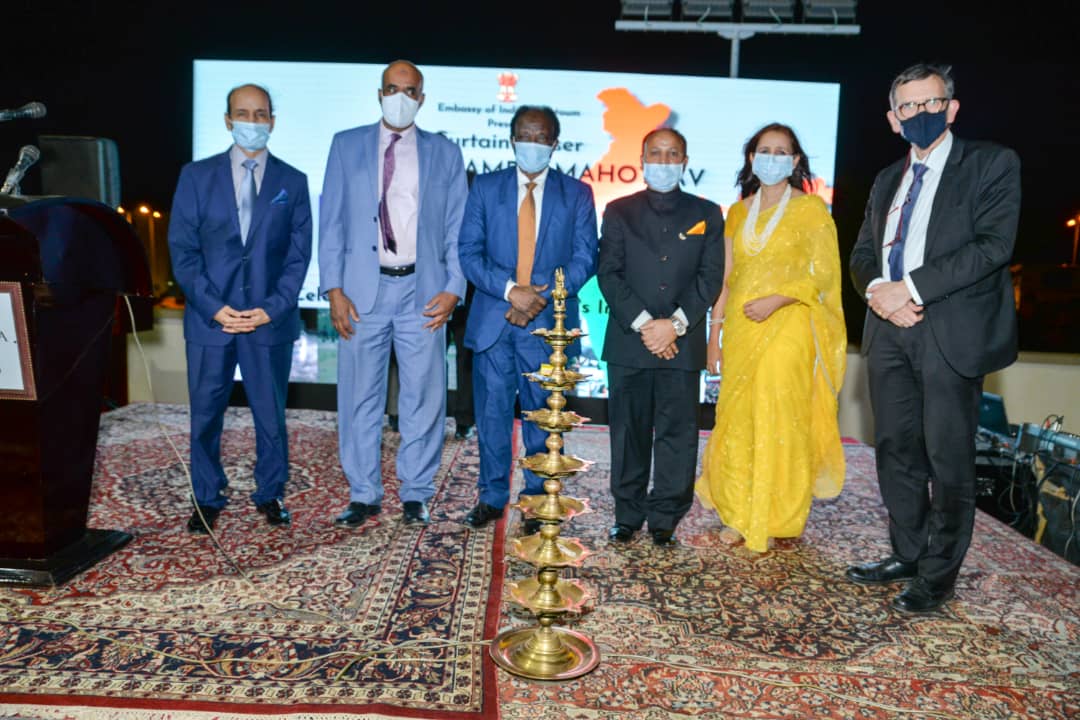 The Curtain Raiser to the 75-week countdown to India@75 Celebrations, to commemorate the 75 years of India’s Independence which falls on 15 Aug, 2022, was held on April 1, 2021 at Corinthia Hotel, Khartoum marking the beginning of the 75 weeks period before 75 years of India’s independence.  It may be mentioned that India attained independence from British colonial powers on 15 August 1947. The event was very well attended by nearly 150 guests including a host of Sudanese government dignitaries, members of the diplomatic corps and international organisations, well-known people from the cross-section of Sudanese society, friends of India and members of Indian community.

In his welcome remarks, Ambassador Ravindra Prasad Jaiswal highlighted the resolve behind the event and the efforts by the Government of India to meet the expectation of the people of India and transform India into a “New India” by 75 years of its independence through targeted and mission mode action on a no. of flagship schemes like ‘Make in India’ ‘Self-reliant India’ and through popular participation that is Sabka Saath Sabka Vikas (collective efforts inclusive growth), and how the international outlook of India, Vasuadaiva Kutumbukam (The world is one family) and Sarve Bhavantu Sukhinah (may all be happy), has helped various countries in meeting not only their developmental needs but also their emergency needs including all possible help in the containment and treatment of the current pandemic, across the world, including Africa and Sudan. He also highlighted the important role of the Indian diaspora in India’s growth story and them being the torchbearers of Indian culture and values abroad, expressing hope that the Embassy would receive all help from various relevant bodies and people in Sudan towards the extended celebrations of India@75.

On this occasion Chief Guest H.E. Mr. Al-Hadi Mohamed Ibrahim Abd Allah, Hon’ble Minister of Investment and International Cooperation, Government of Republic of the Sudan in his remarks highlighted the historical nature of India-Sudan bilateral ties dating back to 5000 years, both countries’ struggle for freedom from colonial rule, Indian and Sudanese soldiers fighting side by side in World War II, Sudan being inspired by the decentralized system of governance in India,  expressed his gratitude to India for standing by the side of Sudan and being an intrinsic part of its development experience including  in emergencies like supplying medicines, food aid in the aftermath of recent floods, expressing hope that the in the times to come India-Sudan trade and cultural ties will see a boost with regular interactions and visit of cultural troupes from both the countries.

HE Mrs. Patricia Maria Oliveria Lima, Ambassador of Brazil to Sudan spoke about the important role played by India along with other IBSA countries in job creation for youth in Sudan. Following her, H.E. Mr. Yuri Afanasiev, UNDP Country Representative, who earlier had a four-year stint in New Delhi in the same capacity, spoke eloquently about “India: as seen by him” wherein he highlighted the impressive culture and traditions of India along with its impressive international role, including in helping the UN in various ways – the largest troop-contributing country (TCC) and one of the largest fund contributors among the countries of the South. HE Mr. Volker Perthes, UNSG’s Special Representative & Head of UNITAMS expressed gratitude to India for extending help to the UN, especially in donating Covid vaccines for UN peacekeepers.

The formal section of the event was followed by playing audio visuals depicting India’s journey since independence and remarkable achievements and a very well presented cultural bouquet including a few semi-classical and folk dance numbers from Bollywood by children from the Indian community and popular Hindi songs sung by Sudanese singers excelling in Hindi songs, reflecting on the popularity of Indian culture and Bollywood in particular in Sudan.